The Dancefloor video compliment to the Apples in stereo short posted earlier has gone live on Pitchfork!
Posted by Unknown at 12:17 PM No comments:

Dayside by the Seashore

Another L'il Whalen animation, this one pulled from a day with the kids at the New Jersey sea shore...
A higher resolution version can be seen here.
Posted by Unknown at 5:14 PM No comments:

Travellers in Time and Space

Some very exciting news! My good friend Greg Gilpatrick's new short for The Apples in stereo goes live today. A viral promotion for the Apples' upcoming album Travelers Through Space and Time, the video features frontman Robert Schneider and Elijah Wood as himself... sort of. Take a look!

I hired on as production designer for the shoot, which happened just after the new year. In addition to scavenging for props and set pieces, I worked with Greg and handyman Billy Lalor to design and build the E.L.F.N.T.-6 Machine... something of an adventure with power tools. It came out looking pretty damn snappy.
Additional videos to come, musical & otherwise. In the meantime, the machine-inspired site is live here.
Posted by Unknown at 12:36 PM 1 comment: 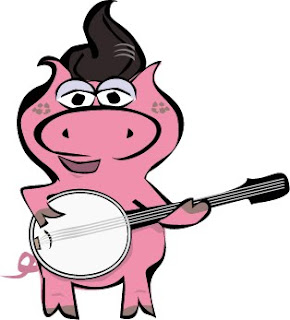 A few months ago I was hired to animate a music video for the children's website PigsWithHair.com. I was given the music and the character designs, and built something from there (the pig above was an caricature I did of Pink Pig before jumping in to animate the original design).
The site's just gone live, take a look!
Posted by Unknown at 10:21 AM No comments:

A tour of 2223 at snappy high speed. I shot this last summer as a goodbye to our Casper house, this week's news of an impending sale (knock on wood, if only for the parents' sanity...) was the needed motivation to fully put it together. I'm sure I've never seen the balcony so cluttered, nor the back bedroom so clean. Amazing.
(Reviewing this post posting, it uploaded a little pixel-y. A clearer version can be found here.)
And, while the sound of Squirrel Nut Zippers is in the air (it just lends such a good beat to these types of pixilations), I'm posting this one for old time's sake:
Posted by Unknown at 11:11 PM No comments:

Early last year, I was approached by a friend about creating some viral animations for Dream for Darfur. While unfortunately nothing official came from the work, it was a good experience of generating work concerning a highly charged issue.
During the development of the project, the Olympic Committee released a series of mascots, or Fuwa (top row). The cute and cuddliness of these characters stood in such strange contrast to the horrors being protested by Dream for Darfur, they seemed like ripe targets for the campaign. I created a set of modified Fuwas (second row), as well as a set of subversively dark Genocide Mascots (bottom row). The line of creating cartoonish creatures to address the situation in Darfur was no doubt terribly delicate; I felt that the frightful seriousness of the mascots (as opposed to the goofiness of this chosen spot) would make for a more appropriate tact. 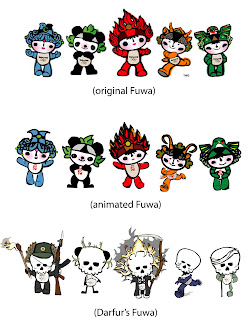 An early animatic...
... and few of the pieces, plates, and stills: 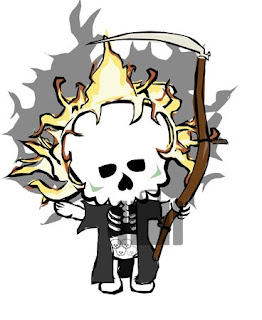 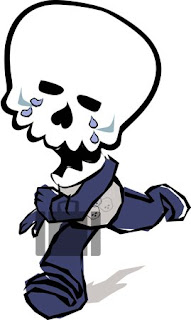 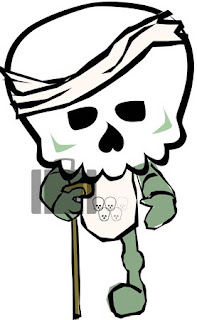 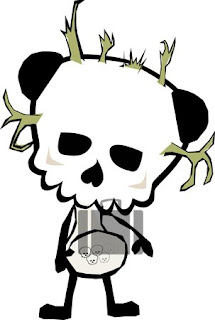 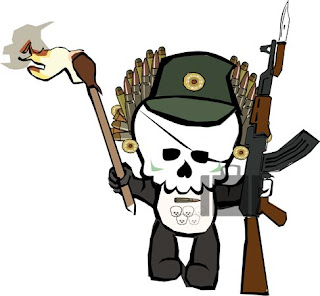 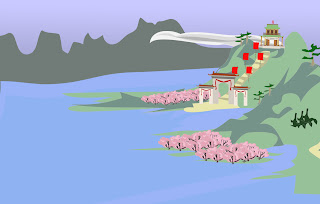 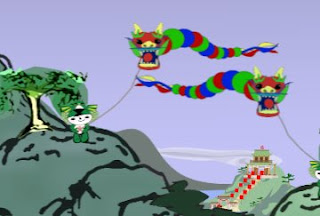 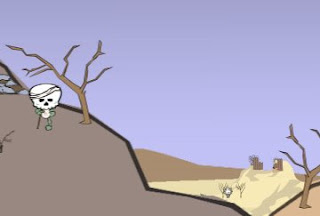 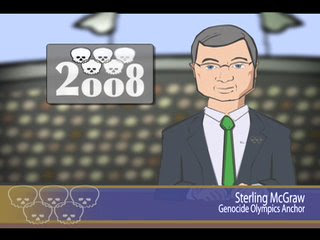 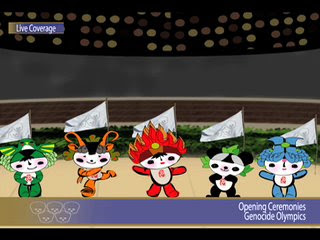 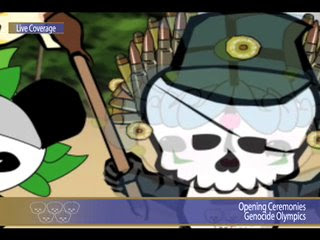 A final Sunday in the City before starting work on The Tempest... what better way than with the kids at the Bronx Zoo's Congo Gorilla Forest?
Posted by Unknown at 9:02 PM 1 comment:

A few months ago I was hired by my brother-in-law to create a logo for his company, Powerscourt Services. It's a new company based in Cambridge, England, connecting investors to investment opportunities (at least, after a week of working with him on this, I think that's what they do). The logo needed to look sharp and serious and English. Additionally, he's started it with his father and brother, so there was an initially was a movement to base the logo on the family crest (which featured griffins and a shield with cinqfoises and fleur de lises). These specific heraldic symbols were later traded in for a similar approach using a crane (which symbolizes fortitude and vigilance), a pillow (authority), and a coin (wealth).
Here are a few of the sketches, ending finally with the chosen logo.